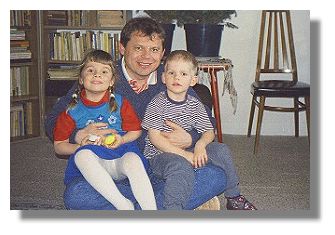 On September 16, 1998 – 3 year old Amelia and 2 year old Daniel went to Poland (Gdansk) on a 4-month vacation with their mother, Alicja Holly-Szuta. On November 28th during the phone conversation mother of the children has announced to the father that is had filed for a divorce and refused to return with children back to California. Below are listed events that have taken place since then.

The above summarized the history of abduction, and failure of the system promised by governments who are signatories to the Hague Convention on International Parental Child Abductions. The story is not unusual, rather typical.  As long as the individual governments allow by existing law for national courts have the option to ignore the law,  these cases are being treated as regular custody cases, there is no reason for LBP to trust the system.

There are times that  I believe that “self help” in the form of re-abduction would have been a better way of dealing in my case.  I was left to my own resources as they fight for the return of the children, the same way as the other parents are. Poland among other EU countries has done virtually NOTHING in preventing the crime of parental abductions. Polish citizens who take their children back to Poland are not risking any criminal charges, and TO THIS DAY parental abductions and interference into other parent custody, in most of EU, is perfectly LEGAL.  Of course, the left behind parents ARE being subjective to automatic parental rights stripping, and are virtually ensured to be extracted from their children lives. All in the name of “best interest of the child” doctrine. The doctrine which clearly says one thing, and the results do the opposite.

I believe that United State Government should reevaluate its cooperation with some countries, that for years show a total disregard towards Hague Convention compliance.  Since this convention is ratified on country-by-country basis, US should break these bi-lateral agreements (for example with Poland, Germany, Mexico and others).  Also, the associated agreements on child support enforcement should be invalidated as well. As long as the other sides don’t believe in US resolve to combat and they can “gain” American system, the current  abuse of American children will continue.